In 1987, Miami Stadium was renamed Bobby Maduro Miami Stadium in honor of Miami resident Roberto “Bobby” Maduro. Mr. Maduro was the former owner of two professional baseball teams in Cuba, the Havana Cubans and the Havana Sugar Kings. He emigrated from Cuba in 1960 after Fidel Castro rose to power.

The Miami Sun Sox of the Florida International League began play in the ballpark in 1949, playing at Miami Stadium through the 1954 season. 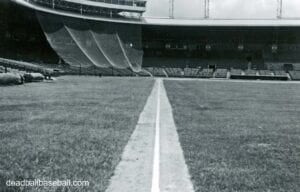 The Baltimore Orioles took over Miami Stadium the following spring season, training there over 30 seasons, from 1959 until 1990.

The Florida State League Miami Marlins and the Miami Orioles also played their home games at Miami Stadium from 1962 to 1988.

Once the Orioles departed, Miami Stadium hosted no additional major league teams, although a Miami entrant to the Inter-American League played for part of one season in 1979, and the Gold Coast Suns of the Senior Professional Baseball League played at Miami Stadium from 1989 to 1990.

The ballpark stood another 10 years, largely unused, with the exception of some college baseball games that were played there during the 1990s.

In 2001, Miami Stadium was demolished and construction began that same year on the Miami Stadium Apartments, which now sit on a majority of the former ballpark site.

The entrance to the apartments is on NW 10th Avenue.

At the entrance is a historical marker, designated as a Florida Heritage Site. 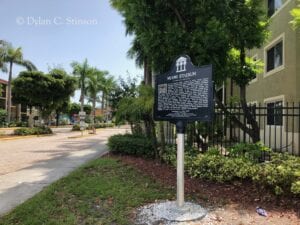 The marker was installed in 2017, courtesy of Abel Sanchez, Rolando Llanes of CIVICA Architecture Group, The Swezy Family, Friends of Miami Stadium, and the Florida Department of State. 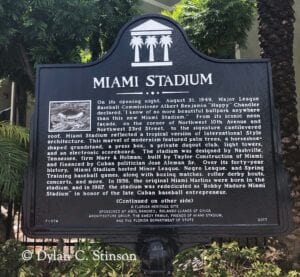 The same is true for a portion of the former site of center field. The paving of paradise . . .

Folks enjoying the pool at Miami Stadium Apartments are swimming in the area that was once left field.

A volley ball court also sits in a portion of what was once Miami Stadium’s left field.

The former Site of Miami Stadium’s right field, and a portion of center field, remain undeveloped, with a grass field marking the spot.

Warehouse at 864 NW 23rd Street, Across Street from Former Site of First Base Grandstand, Miami Stadium

The store certainly captures a bit of the neighborhood/architectural feel of the old ballpark.

The Miami Stadium Apartments are located a mere two miles northeast of Marlins Park, home of the current-day Miami Marlins.

Opening Day 2016 at Marlins Park, Home of the Miami Marlins