If you would like to read more about Byron Bennett’s exploits tracking down lost ballparks, be sure to check out Deadball, A Metaphysical Baseball Novel.

The Story of Byron Bennett

Deadball is the story of Byron Bennett, a former minor-league player who has a deep and spiritual connection to the game of baseball and its history. He sees things in a way others cannot and believes in things others would not. He thinks the old men working the menial jobs in the diners, dives, and graveyards he frequents are not what they seem. They try to fit in, go unnoticed, but Byron suspects they are not your typical second-career working stiffs.

Part pilgrimage and part road trip, Deadball visits vanished ballparks like Baltimore’s Union Park, Pittsburgh’s Forbes Field, Cleveland’s League Park, Detroit’s Tiger Stadium, and Brooklyn’s Ebbets Field in Byron’s attempt to bring the past back to life. As visions of baseball’s golden era appear around him with greater frequency and intensity, he must question everything he believes about life, himself, and the game he loves. Are the flickering images he sees real, or are they all in his head? His friends, his ex-wife, and his former teammates don’t believe what he tells them he sees. At times, neither does he. 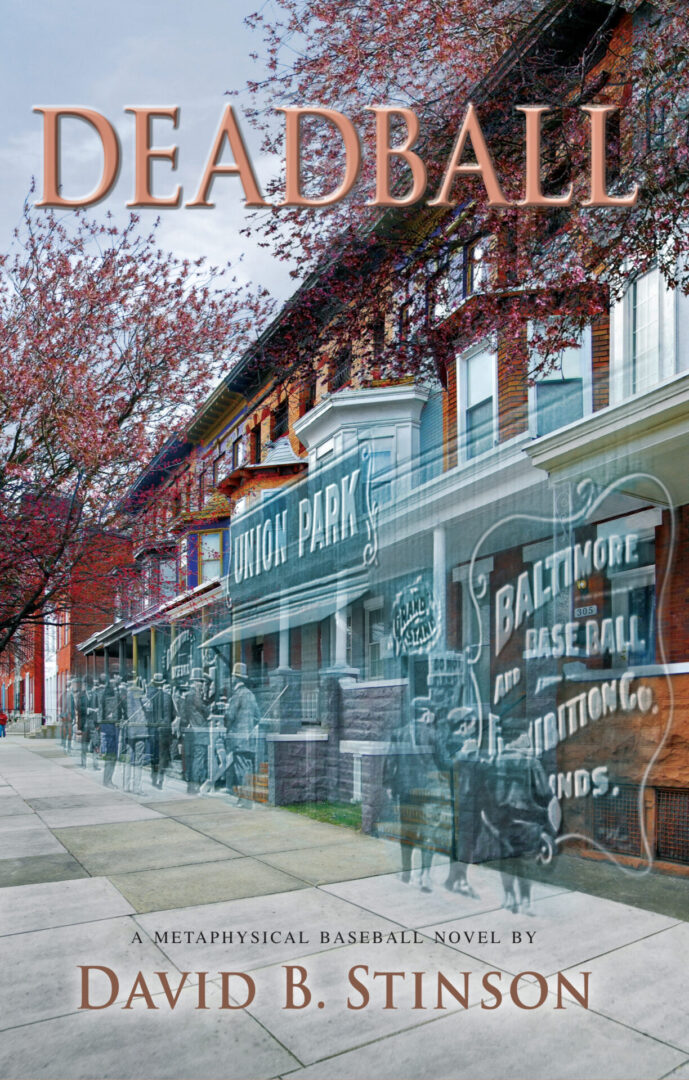 “David Stinson’s new book Deadball, is a breath of fresh air for buffs of Baltimore baseball heritage. His lacing of historical persons, places, and events into his fictitious ballpark sojourn is well crafted and a pure delight to read. I urge him to write another!”

“Deadball is about the magical intersection of memory and mystery, a place where the crack of the bat and the shouts of the crowd mingle with the bricks and mortar of vanished ballparks. It’s about trying to turn a double into a triple and about trying to turn a barely-held memory into a tangible artifact. Someone once said you can’t go home again. But you can. That’s the whole point of baseball, after all – and of David Stinson’s beguiling new novel.”

Deadball is “engaging.” An “entertaining and bittersweet story.”

“The memories of those great games in history still remain. Deadball is an original novel from David B. Stinson as he explores the history of baseball and the cities those teams called home, as ballplayer and ball lover Byron Bennett finds the history he knew lived on in ways he couldn’t quite fully understand, as spirits of the past approach him in many locations. Deadball is a riveting read for fans of baseball and its long and storied history.”

“David Stinson accomplished his mission. I read. I learned. I experienced. I thought. I questioned the baseball past and start[ed] looking to my baseball future. I am. Therefore baseball is the answer. The Metaphysics of Baseball. Welcome to Deadball.”

Never Too Much Baseball and Seamheads

Deadball is “A Pilgrimage to the Past.” “Stinson’s style is straightforward and casual, as if he’s just along for the ride, too, not even in control of what happens next . . . . Is the payoff worth it? Yes. Absolutely. Read it and discover the connections for yourself.”

“Deadball, A Metaphysical Baseball Novel [is] about a minor league player possessed by visions of baseball greats gone by. Driven to the point of obsession, he begins traveling the country to see for himself the vanished stadiums and places that made baseball history. A novel thriller, the book also incorporates plenty of baseball history that fans will appreciate and enjoy.”

“Deadball keeps the reader guessing about what its main character is going to think, find or see next on his theological journey through baseball lore. This novel is unlike any other baseball book in that it does a good job of combining past truths such as the history of well-known ballparks from the beginning of the 20th century with fictional occurrences such as the story of Bennett’s life and the visions which have come to him.”